How Can I Keep from Singing?

This is based on an old Shaker hymn which I suggested as a suitable addition to the album, not only because of the beautiful melody, but the lyrical content seems as relevant today as it did 250 years ago when the hymn was written.

It is unfortunate that the Shakers are known to the world at large mainly for their ability to build and design beautiful furniture. The Shakers also wrote beautiful music and songs with which they glorified their joy in living. They lived very simple lives and their melodies reflect the beauty inherent in this simplicity.

It is not widely known that in 1846 the Shakers sent food to Ireland in an attempt to relieve the suffering during the famine, and this also held significance in our decision to arrange the piece.

Enya: "This is another song that’s very old, it’s two hundred and fifty years old and it was written in America by the Shaker sect. And I felt the melody was very beautiful, and the lyrics were very strong. They talked about the trouble in the world, the strife, the turmoil, but at the end of each verse it simply said "how can I keep from singing?". And I believe this in music, that sometime at some stage you’ve got to try and forget the trouble that is around you and try to enjoy music." 3LO Radio Interview, 1991
enyabookofdays.com

“It was suggested firstly by Roma and then Nicky,” recalls Enya. “They got me a copy of it and I listened to it and was drawn to the melody immediately because I have a great love for a strong melody, and this is a strong melody. Even though it’s 250 years old, and it was written in the Americas by the Shaker sect, the lyrics could have been written today because it talks about problems in the world – trouble, the strife, the tyrants. And then at the end of each verse, it simply says, how can I keep from singing.”
Jazziz Magazine, 1992
enyabookofdays.com

Enya: "Well, the hymn is two hundred and fifty years old, and it was introduced to me by Nicky, and working on it in the studio I felt, and the last verse, it was such a pity to sing “How can I keep from singing?” and to finish, so I started to hum a little melody that the piece made me feel, that would suit it, and therefore I started composing little parts of the melody to complement it, and the more I would sing and work on it, the more it became more an Enya track."
Music From The Bridge, London Weekend Television, 1992, enyabookofdays.com

Enya and her record company were sued for copyright infringement by Sanga Music, Inc. for recording this "traditional" number because she had mistakenly credited this track as a "traditional Shaker hymn," thus assumed it as public domain. The third verse was, in fact, penned by Doris Plenn in 1956, who learned it from her grandmother, who claimed it had been written in the early days of the Quaker church. Folk legend Pete Seeger helped make the song fairly well-known in the 1950s by publishing it with Plenn’s additional third verse in his folk music magazine Sing Out! (Vol. 7, No 1. 1957), recording it, and mistakenly credited it as a "traditional Quaker hymn" without copyrighting Plenn’s verse, thus presenting the entire song as "public domain." It was again published by Sanga Music, Inc. in 1964.

Its origin and controversial legal status was later clarified and settled in court in 1992: it was neither a traditional Shaker nor Quaker hymn—it’s actually a Sunday School song written by Rev. Robert Lowry that was published in a songbook he edited titled Bright Jewels for the Sunday School (New York: Bigelow & Main, 1869). Because Seeger presented the new verse as being public domain, the court decided that Plenn had lost her rights and Enya could use the verse without paying royalties. 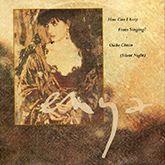 The ‘How Can I Keep from Singing?’ music video was shot at Poison Glen in Donegal. It includes archive footage of political figures such as Nelson Mandela or Boris Yeltsin, and references to the Gulf War and famine. The video leaves out the middle part of the song.

My life goes on in endless song
above earth’s lamentations,
I hear the real, though far-off hymn
that hails a new creation.

Through all the tumult and the strife
I hear it’s music ringing,
It sounds an echo in my soul.
How can I keep from singing?

While though the tempest loudly roars,
I hear the truth, it liveth.
And though the darkness ’round me close,
songs in the night it giveth.

No storm can shake my inmost calm,
while to that rock I’m clinging.
Since love is lord of heaven and earth
how can I keep from singing?

When tyrants tremble in their fear
and hear their death knell ringing,
when friends rejoice both far and near
how can I keep from singing?

In prison cell and dungeon vile
our thoughts to them are winging,
when friends by shame are undefiled
how can I keep from singing?