The Memory of Trees

Enya’s fourth album was released on 5 December, 1995. The title refers to the Irish mythology and the Druids that considered the trees to be the sacred guardians of memory.

It’s actually from Irish mythology, Roma suggested the title. It’s derived from the Druids, and they held the trees as very sacred, so they were very important. So I thought the title was very strong, but it can conjure up other sort of thoughts for a lot of people. And I think Roma enjoyed that as well, that for people who don’t know the connection with Irish mythology, that they will interpret, their own thoughts with it. Enya, KSCA 101.9 FM, 1996

The album artwork was inspired by Maxfield Parrish’s illustration ‘The Young King of the Black Isles’ painted in 1906 for ‘The Arabian Nights, Their Best-Known Tales’ book. 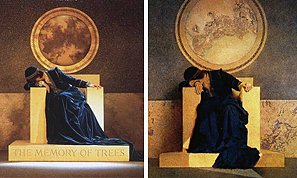 The Memory of Trees inlay vs. The Young King of the Black Isles

There were two promotional music videos shot for the album: ‘Anywhere Is’ directed by David Scheinmann and ‘On My Way Home’ directed by the former Warner Music CEO Rob Dickins.

Warners has arranged a launch party which befits the majesty of the lady’s music. A crowd of journalists and broadcasters from all over the world have gathered at Charing Cross Pier in London to await the arrival of the Silver Barracuda, a pleasure boat which will take us down the Thames.

At Greenwich, we are brought to the Queen’s House, a beautiful building, designed by Sir Christopher Wren and adorned with maritime paintings by Cooke and Gainsborough, and relics of Britain’s sea-faring history. It’s the perfect setting for Enya’s impending return into the spotlight, chosen partly for its grandeur, and partly because it stands at the geographical meridian zero – what better starting point for Enya’s musical journey than the world’s centre of longitude?

While the guests sip champagne and nibble on canapés, Nicky and Roma Ryan mingle and chat among the crowd; Nicky no doubt discussing aspects of production, and Roma offering insights into the lyrics which she writes for Enya. WEA boss Rob Dickins announces the arrival of his protégée, begging our indulgence for this shy and private person who may feel a little uneasy in a crowded party atmosphere. Like a ghost from the past, Enya emerges from behind the vast columns, and is brought round the room like a queen, to meet and greet her loyal media subjects.

Some of us have been granted a private audience with her the next day, so tonight we content ourselves with a brief exchange. The party ends with a spectacular fireworks display – ladies and gentlemen, Enya is back with a bang.The Enigma of Enya, Irish Times,1995
enyabookofdays.com

‘The Memory of Trees’ won the 1997 Grammy Award in the Best New Age album category. 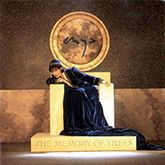 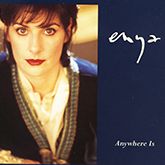 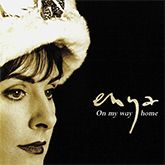 ‘ANYWHERE IS’, the unavoidable first single taken from this much-heralded follow-up to the eight-million selling Shepherd Moons, is infectiously catchy and in that sense represents a worthy successor to ‘Orinoco Flow’, her 1988 number one. But it is one of a kind: the remainder of this typically multi-layered, wonderfully-produced, echo-laden affair, is less melodically and rhythmically accessible and deliberately so. The Memory of Trees is by turns, more textural and cinematic in its overall approach. But this, apparently, is how Enya’s legions of devoted fans like it and in that respect they won’t be disappointed.

The title track, an "instrumental with voices", is just that: swathes of sweeping, rolling synthesizers and vocal sounds are constructed into a postmodern Phil Spector-esque piece of Gothic sonic architecture that remains so ethereal and celestial, it makes her siblings in Clannad sound like a garage band. ‘Pax Deorum’ is another fine piece, based around a haunting Latin chant that will no doubt provide a suitable aural soundtrack to many a New Age soirée. Meanwhile, the only Gaelic lyrics on the album feature on the hymn-like but engaging ‘Athair Ar Neamh’.

Coming as it does judiciously placed halfway through the proceedings, the less complex, piano-based instrumental, ‘From Where I Am’, with its languid atmospherics, provides a welcome relief from the barrage of digital sounds. Elsewhere the other instrumental, ‘Tea-House Moon’, broadens the canvas further with its strong Chinese influences.

Throughout, the huge choral effects on the voice are a production triumph of painstaking perfectionism. But Enya has an angelic, attractive voice, stripped back, and its purity can be heard more clearly and appropriately, on ‘Once You Had Gold’. The album closes with the optimistic ‘On My Way Home’ – a likely future single which could, with repeated listening, insinuate itself into your heart in the way that ‘Anywhere Is’ already has for so many.

Incidentally, it says on the sleeve notes that Enya plays all the instruments but, unusually, doesn’t state what they are. Then again, I suppose there are only so many ways of describing a keyboard! Either way, with the instinctively appropriate support of lyricist Roma Ryan and the venerable Nicky Ryan at the production controls, Enya has made a singular and impressive record. I see no reason why The Memory of Trees shouldn’t eclipse even her inordinate successes to date.

She may not convince three-chord trick merchants or those who insist that they want their music down ‘n’ dirty. But that was never the object of the
exercise. The Memory of Trees is music of the spheres.
Colm O’Hare, Hot Press, 1995
enyabookofdays.com