While working on the ‘Lord of the Rings’ soundtrack, Roma studied Tolkien’s Elvish languages, Sindarin and Quenya. She then wrote lyrics for ‘Aniron (I desire)’ in Sindarin and lyrics for ‘May It Be’ in Quenya. Inspired by this experience, she created her own fictional language, Loxian. Loxian can be heard on ‘Amarantine‘ and ‘Dark Sky Island‘.

You try things in English or Gaelic and sometimes it just doesn’t sound right, so after writing in Tolkien’s Elvish I thought I’d try my own language. It meant we could create the right sounds and words for Enya’s voice so the poetry of the lyrics sit on the curves of the music. Roma, 2005

From Aldebaran to The Loxian Gates

We have journeyed from Aldebaran, the track that tells of the future migration of the Celts through space, to the three Loxian songs of Amarantine, which were born of Aldebaran. In Aldebaran, the lyrics are in Enya’s native tongue — Gaeilge — and so the Irish language is brought forth to play its part in the future. The three Loxian songs — ‘The River Sings’, ‘Water Shows The Hidden Heart’ and ‘Less Than A Pearl’ — are dear to me as, to the wordsmith, one of the most exciting elements of all is that of the creation of a word. Because both Enya and Nicky share a spirit of exploration and discovery, I have had the opportunity with the Loxian songs not only to gather words, but to create them. The word Loxian itself has undergone its own metamorphosis, coming from the epithet of the Greek God of the sun, of truth, of prophecy — Apollo, the archer-god, the loxian. A god of the sun whose name we have given to those who travel to the moon. It is a subtle irony. So, too, is the language of the Loxians, whose words we have woven into these songs, yet those very words belong to a future migration travelling beyond Aldebaran.Roma Ryan from ‘The Very Best of Enya’ collector’s edition
EMI Music Publishing Ltd, 2009 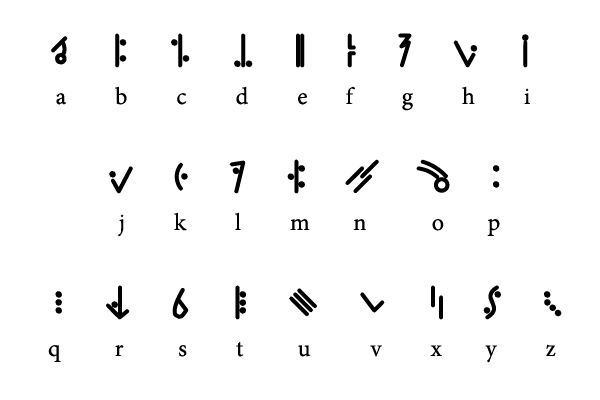 The lyrics to the Loxian songs on ‘Amarantine‘ are written in the water script.

Roma creates and coordinates the Loxian Games, a series of online treasure hunts based on the Loxian world and language. They are hosted on the official Enya website and include many devious puzzles.