Roma for ‘The Very Best of Enya’

With lyrics, words are not merely shaped by the experience of sorrow or joy or the emotion of love, nor by the observation of rain or snow and the fundamental workings of the natural world, but also by the pitch of the note, the quaver, the weave of the melody, the intonation of the voice. Therefore a word can be uprooted, stretched, changed, adapted in sound or spelling, given a protean energy so that it may flow with the melody, and yet retain the essence of its meaning. 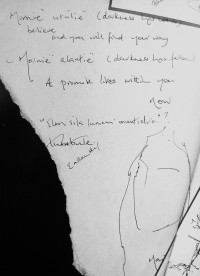 These metamorphoses are part of the journey of words and music I have shared with Enya and Nicky throughout the years. One of the most inspiring aspects of working with them is the way they interpret the lyrics. We do not always find the same meaning in a song. The finished songs are the culmination of ideas in music, in sound, in words.
The sound of the word is very important to Nicky.
The placement of the word matters greatly to Enya.
The meaning of the word is my primary concern.
These are the forces that forge the songs.
Sometimes the words I gather together and assemble need no change to them. But sometimes in the creation of a work, there is the ‘metamorphosis’ of the word.

It has been a truly unique journey. The miles have been made from the wonder of discovery, the sadnesses told, the surprise of success, the lost words that found themselves again in song, the sound of laughter, a few tears and a lot of energy and enthusiasm. And how far we have travelled! 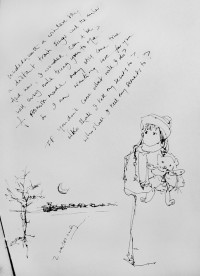 We have travelled from a time when the two Shepherd Moons referred to in the title track of the second album were simply known by a number — S1980S27 and S1980S26 — to this moment when they are named; Prometheus and Pandora. Other shepherd moons have since been discovered, and more than this, now we can hear the sound of Saturn, the sound of Jupiter.

We have journeyed from Aldebaran, the track that tells of the future migration of the Celts through space, to the three Loxian songs of Amarantine, which were born of Aldebaran. In Aldebaran, the lyrics are in Enya’s native tongue — Gaeilge — and so the Irish language is brought forth to play its part in the future. The three Loxian songs — ‘The River Sings’, ‘Water Shows The Hidden Heart’ and ‘Less Than A Pearl’ — are dear to me as, to the wordsmith, one of the most exciting elements of all is that of the creation of a word. Because both Enya and Nicky share a spirit of exploration and discovery, I have had the opportunity with the Loxian songs not only to gather words, but to create them. The word Loxian itself has undergone its own metamorphosis, coming from the epithet of the Greek God of the sun, of truth, of prophecy — Apollo, the archer-god, the loxian. A god of the sun whose name we have given to those who travel to the moon. It is a subtle irony. So, too, is the language of the Loxians, whose words we have woven into these songs, yet those very words belong to a future migration travelling beyond Aldebaran. 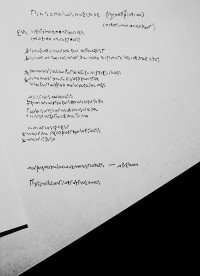 But the gathering of words must never be dismissed. They are a vital inheritance. Without them, man would never reach the stars, know the moon, hear the sound of Jupiter. Even though at times they may be misunderstood, they are essential to our day to day living. Yet they also transcend that existence and, in lyric, become a way to share both the greatness of the natural world and the most personal experiences and emotions.

And now, as l assemble these words, I return to you some of the fragments I have gathered.