Shortly after the release of ‘Amarantine‘, Roma self-published her first book ‘Water Shows the Hidden Heart’ that further developed the story of the Loxians, the fictional people introduced on the album. This limited hard-cover edition featured a foreword by Enya, background to the songs of the Loxians and a selection of Roma’s poems. 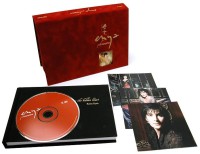 The book got reprinted a year later as a part of US-only Amarantine deluxe boxed set. The second edition omitted Enya’s introduction and added colour images and a different selection of Roma’s poetry.

Both editions are now out of print.

Foreword to the first edition of Water Shows the Hidden Heart

Enya is three people – Roma, Nicky and myself. We have worked together since the beginning, and the road through our musical history has been an exciting and fulfilling journey for us all. It has been filled with magic, and part of that magic are the words Roma writes for us. When we embarked on “Amarantine” our sixth album, in September 2003, I had no idea I would be singing not only in Japanese but in a language created by Roma, which she calls Loxian. In order to give both substance and reason to the language, Roma created her own world for the “Loxians”. This world is contained within these pages and it was from this story that three of the songs on “Amarantine” took shape. I have always loved Roma’s lyrics, I cannot imagine my music without her words. She writes my voice. I sing her heart. Nicky makes everything possible. I love this story. Although it may seem to belong to the world of the fabulist, for me it also combines a sense of reality with the emotional. It brings us closer to the way Roma thinks as lyricist, poet and storyteller. Enya for Water Shows the Hidden Heart
Valley-Dwellers, 2005