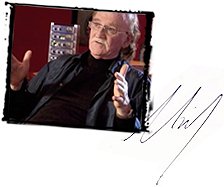 Nicky Ryan is Enya’s producer. He is married to Roma Ryan.

Prior to working with Enya, Nicky mixed live sound for Irish acoustic groups such as Planxty and Clannad. In 1980, during his period as Clannad’s manager, Nicky decided to bring Enya into the ranks.

Enya was still going to college at that time, but I knew of her interest in keyboards, and I knew she was good. I also knew she had an excellent voice, with an impressive range. I thought by introducing Enya into Clannad that we’d add not only a new vocal texture, but also make the group more interesting and more interested in what they were doing. Also, since she was a member of the family, I didn’t think there’d be any personality hassles. Nicky Ryan

I used to show Enya what we wanted in terms of background stuff for Clannad; what I wanted her to play; how the strings should feel at a certain point and so on – and we found ourselves working together during the spare time we had on tour. I began to notice that she had an awful lot to offer in her own right, and it wasn’t getting an airing in the group. Nicky Ryan

Nicky knows when he has captured the right performance from me. I may be a perfectionist, but he says when a song is done. I trust him. I have to take his word for it. I’m lucky to have him. Otherwise, I’d probably be in the studio forever. Enya

‘Ask me anything’ interview

Nicky answered a couple of questions submitted by fans during the ‘Dark Sky Island’ promotional tour.