This is a song telling the story of a man who is looking for whom he loves and has lost. It describes his emotional journey in images – cities, islands, valleys. Memories and emotions take a physical form, a visualization. The lyric itself is adapted from a book of the same name which describes these places, this journey.

"…he looks into the eyes of the water and sees his own eyes, looking. They reflect everything, these waters, even the hidden heart."
notes and illustration by Roma Ryan
Amarantine promotional box, 2005

Enya: "I went to sing it ‘Water Shows the Hidden Heart’ [in English] and it didn’t work. It actually didn’t work. And this is one of the reasons we do try other languages, because we always feel that we’re trying to get across what the song is about. I’m going to try and sort of capture an emotion, what the song is about. So, if the language is wrong, then we feel, that we have to look further. So Roma then came in with the first line, which is, ‘Syoombraya,’ and I went to sing it, and that’s how [Loxian] started."
Late, Late Show, 2005
enyafanstudio.com

‘Syoombrraya’ meaning ‘Water Shows the Hidden Heart’ was the first expression created in Loxian. Roma created the artificial language after the song didn’t work in English, Gaelic and Latin.

In 2005 shortly after the release of Amarantine, Roma Ryan self-published the ‘Water Shows the Hidden Heart’ book that further developed the song’s storyline. This limited hard-cover edition also featured a foreword by Enya, information about the Loxians and a selection of Roma’s poems. The book was later reprinted and included in the Deluxe Collector’s Edition of Amarantine boxed set. The second edition omitted Enya’s introduction and added colour images and a different selection of Roma’s poetry. Both editions are now out of print. 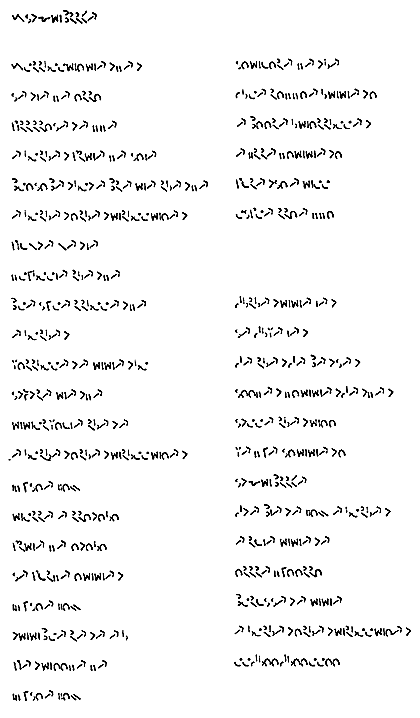 where the Cities that do not Exist, exist
It brings him
in silence through the night
close to the City of Realisations;
it is here one finds the way…
…Mount Orison
the City of Days
the Tree of the lost
he journeys on…
…north of his love
a road through a valley of darkness
the islands that are not of this world
he journeys on to find his love…

It is a long way through darkness
to the way of the eremite
the eremite sings of the world and of
the journey of love, which is not lost in eternity
…the Valley where the moon is caught in the trees
water shows the hidden heart
endlong into midnight
he journeys on…
…the parable of day
the Room of Books
where the winds come to him and say…

in this city of the stillness of night shapes
are the words of the timeplace of the end-other
which speak of a place where the clouds of the sky are weeping,
which tells of the journey of a man with sadness in his heart

he journeys through the city of the thinking that does not end
through time
and beyond the island of the house the colour of the waves
themselves, as it is,
past the straight earth of the journey’s end and all that is
found there
he journeys on to ﬁnd his love

the road takes him through
to the city where the sky is dreaming,
this one-who-is-looking-for-whom-he-loves,
where the thinking that does not end is within him.
then come the shape of dreams
and the way of the scent of love lies sky dreaming.
the road takes him,
the one-who-is-looking-for-whom-he-loves
and sings of places that exist not existing.
through silence and through night

the road takes him
to the city that looks at ﬁnding the shape of the lost.
it is here one ﬁnds everywhere the way.

he comes to the mountain of the shape of the breath
and through the city of the always happening.
beyond this city he comes to the river-tree of where the lost are.
he journeys on

to where the snow lies beside love
and through a road the time of darkness ﬁnds,
to the islands that are not anywhere,
he comes to the shore of the island of the city of silver.
the journeys of his love breathes in silence

yet that which the journey may sing
that which the world sings
is a long journey, far, to the place of darkness
of one knowing the night,
the lost shapes of far night.
is this a place ending the journey of love?

his heart hears the parable of the timeshape of night,
the one—who-is-looking-for-whom-he-loves,
and he goes to the room of the written breath of the other.
come the winds to the place and say

whom you love is in your heart