Launched on 13 October 2003, back when frames were dead but tables were still a thing.
Runs on WordPress, gummy bears and chocolate.
Created by Lucia whose face you can admire up there.

What’s the site’s name? What does ‘sk’ stand for?

When I first launched this website, I named it ‘Out of the Blue.’ Later, when I moved it to its current domain, I used it less prominently because I realised how long it was and that people didn’t remember it anyway.

Very recently, I renamed the site to ‘EnyaBlues’ after my Tumblr blog. I like that it still keeps ‘blue’ from the original name, includes ‘Enya’ and can refer to Enya’s blue songs, be it the melancholical ones or those with blue in the title. There are quite a couple of those!

As for the ‘sk’ top-level domain, it stands for Slovakia. The ‘com,’ ‘org’ and ‘net’ domain names were taken when the site overgrew the free hosting, so I opted for my home country. Slovenskooo!

Why did you make the site?

Once upon a time, when I was just a wee lass in high school, I got ill and had to stay at home for a week. Because I had both too much free time on my hands and a Namo WYSIWYG WebEditor 2.0 installation cd from a friend, I decided to make my first website. I also had lots of Enya wallpapers on my harddisk that I wanted to share with the world, because even at such a tender age I knew full-well that the world needed more Enya wallpapers. What else would desperate fans put on their desktop? So I made this fansite and then it just grew and grew. I’d have never imagine how big it woud get one day. You probably can’t imagine either, because clicking on everything would keep you here for days.

I’d like to point out that I am not Enya and I am not in contact with her. I have never met her either. 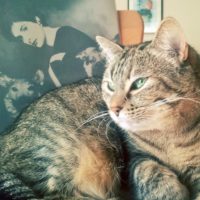 That said, I am just a fan with a big love of webdesign and Photoshop collages. I am 29 right now, I was surprised to hear that people thought I was older (hello Amelia!). Feel free to contact me in the comments, on the site’s Facebook or Twitter accounts, I promise I don’t bite strangers! 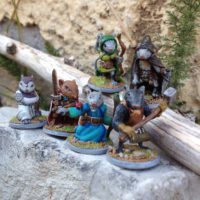 Mice and Mystics
(My game miniatures)

My other hobbies include reading (I am a huge reader, my Kindle is full of books, I especially like fantasy and sci-fi novels), collecting illustrated books (most of them are in French because they have so many beautiful books), travelling (a bit less now than in the past, but it’s fun), taking photos of my cat (that photo of her with ‘Dark Sky Island’ went viral in the Enyaverse) and boardgames (yes, you guessed it, I am a big geek).

I live in France with my boyfriend and my cat, so there are always lots of castles to visit and lots of great food to eat.

From time to time I get nostalgic and like to browse through old versions of this wonderful website. Those old, old designs are particularly fun to look at! I had no previous experience with webdesign before OOTB and was super-happy with every single layout when I finished it.

I can proudly say that I’ve never-ever used Flash, cross my heart.

1. October 13 – November 3, 2003
The very first version, which I loved to pieces and was so much proud of. Soooo much. You can’t even imagine. Completely made in a WYSIWYG editor, I didn’t get to see the source code but who’d bother with such things anyway.

2. November 3 – December 9, 2003
After 2 weeks and a conclusion that the design needed more images to be really cool, I added a photo of Enya. It worked.

3. December 9, 2003 – February 9, 2004
Winter didn’t even start and I redesigned the site once again. This time in warm shades of brown, 3 columns and with absolutely cool falling snow on the index page …oh, sir, you should’ve seen it, sir! (in words of Mister Groat)

5. March 30 – June 8, 2004
I implemented a theme switcher for the ultimate wonderfulness. You could choose between Shepherd Moons (blue), A Day without Rain (green) and Watermark (red) style. Woooow! I hear you say.

6. June 8 – December 3, 2004
While being online, this one went through various colour changes. It ended in a purplish blue/black colour scheme (yeah, Sumiregusa time) accompanied by two alternative autumn options.

8. March 14, 2005 – April 18, 2006
A variation on the previous design with a colour scheme built around the forest header photo and a little pixie in the footer. I liked it a lot, it was calm and relaxing.

Amarantine special: Nov 8, 2005 – Dec 18, 2006
Squirry told me that I just have to make a webspecial for "Amarantine". So I made this one very special webspecial. The design was inspired by my Pucca t-shirt ;)

9. April 18, 2006 – October 13, 2006
My first (finished and uploaded) layout made in Photoshop. I followed a tutorial to get that drawing-like look for the photo I wanted to use, and then layered dozens of brushes and textures.

10. October 13, 2006 – December 18, 2006
"Happy birthday" design to celebrate the three years of the site’s existence. The colours were rather sensitive to the monitor’s settings, so Enya’s face got green easily.

11. December 18, 2006 – March 15, 2007
While I was doing my Christmas shopping, all that wintery decoration left a mark on me. As it was uploaded at the time of all special/collector’s/etc. Amarantine releases, I couldn’t resist and named it "A special winter edition".

13. June 27, 2007 – November 2, 2008
Layout inspired by Brody Neuenschwander’s "A Box of Dreams" artwork and the earrings. Those dangly seahorse earrings every fan loves to pieces, y’know. You love them too, don’t you?

18. January 28, 2012 – December 8, 2014
Design featuring the It’s in the Rain single cover. The site was rewritten in php and the news and articles were transferred to WordPress.

I hope you learnt everything you wanted to know, have a nice stay!