So you’d like to get Enya’s music videos as well? Obtaining all the videos of your favourite Irish lass is unfortunately not as easy as it might seem. For some mysterious reason (I’d say copyright issues but who knows), there is no single release that would regroup all of them. Uaaah!

The cheapest and easiest way to start your collection is to download the videos from iTunes or other online store. It is fast and you have no dvds to dust and scratch. But if you are like me, you want to hold those shiny little discs in your hands. And I will help you. 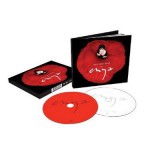 The long-awaited worldwide release that finally brought Enya’s music videos to all. Quality and price-wise, this is the best you will get. A very logical first step for your video collection. You probably have it already, don’t you?

The infamous 2001 dvd! Why is it infamous and why should you want it if you have the TVBOE dvd?

Firstly, it was released only in Europe and Japan. For a very short time. Then it got withdrawn without any clear explanation. So you either snapped it straight away or paid an outrageuos sum to get it afterwards. This being the only official Enya dvd between 2001 and 2009, you can imagine that the prices skyrocketed. Luckily for you, thanks to the TVBOE dvd, it is no longer the case and you can get a used copy for about 20 pounds without bigger problems.

So why should you want it? Well, because it features ‘How Can I Keep From Singing?’ and ‘Exile’ that are not included on the 2009 release. There is also a lip-synched performance of ‘Book of Days’ on ‘Top of the Pops’. Honestly, I couldn’t care less for HCIKFS but I have a soft spot for ‘Exile’. Chances are that the videos were omitted from the new release because they contain third-party footage and additional copyright clearance would be needed.

In case you decide to get the dvd (and why shouldn’t you?), be very careful. Due to the fact that it was almost impossible to get, bootlegs filled the gap on the market. Many private sellers don’t even know that they are selling an illegal pressing.

What you want:
-cardboard box or clear plastic case
-round green sticker on the front
-black disc
-2-page booklet

What you do not want:
-no sticker
-picture disc
-no booklet

Just to finish, the UK cardboard packaging is very nice but definitely not the most practical thing on the planet. The booklet is not attached so it has a tendency to fly all around the box. And if you break the plastic dvd holders or the box itself, you are doomed, there is no way to repair it. But as I said, it does look good.

The Lord of the Rings: The Fellowship of the Ring (Two-Disc Widescreen Theatrical Edition) (2002)

‘May It Be’ is a lovely little video but as Warner doesn’t hold rights to the movie footage, it was not included on any Enya dvd. The only way ot get it for now is to buy the movie dvd that includes the video as a special feature. Be careful, not all editions have it.

The 2-dvd set contains the BBC documentary ‘The Celts’, for which Enya composed the soundrack. There is a separate post that presents the release in detail. What interests us now is that it also contains music videos for ‘Aldebaran’ and ‘I Want Tomorrow’ that cannot be found anywhere else.

This is the end of Part 1, stay tuned for the Part 2 where I will talk about Enya documentaries. Spoiler alert: “He said, he said, he said…and then I went wow!”

may it be, movies, videos